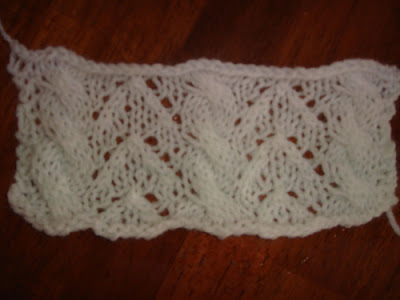 This is the swatch I knitted from a German pattern that Claudia created. I don't know how she found the time to do all this because she started a contest, each day posting a different knitting term on her blog, in German with the English translation. Then she gave everyone the pattern, in German, and we had to knit up a swatch using this pattern written in German. I, of course, took one look at it and said, "Oh right, sure......I can do this." Not. I have trouble following patterns in ENGLISH, let alone in German. Then when I saw that 3 people had done it and their swatches looked so good I thought that I was being such a baby with a BIG I can't do this attitude. It did take me awhile to translate it but on the 4th try the swatch was done. Hey, when someone says the word contest I'm running in that direction and I always want to WIN. Actually, I think it's not so much as the prize but the thrill of the hunt.
Posted by Phyl at 1:11 PM