Making Up For Lost Time

I have been a very bad blogger. VERY bad. Oh well. Now I'll play catch up with a montage of what's been happening for the past month, in no particular order. Yes, I've been knitting. 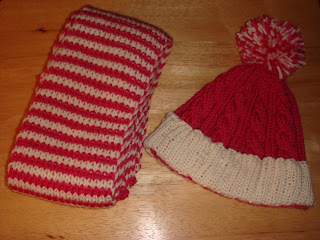 This is the hat & scarf that I made for Jenna when she went skiing in Vail with her friend Morgan and family during Spring Break. What a lucky duck! She's never seen snow or mountains like THAT before and had a blast. She did pull a trick on me, though. She called one afternoon, crying, and told me she broke her finger. I naturally went off the deep end, asking her what happened, etc, etc,. She said she just got back from the doctor. And it was her "ring finger". Then she said "April Fool". I wanted to smack her. That was the 2nd April Fool that was imposed upon me that day, the 1st was from my boss, and by the end of the day I wanted to rip someone's ears off. But I didn't. 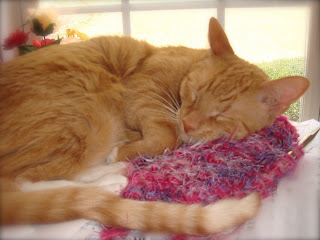 I've been working on an ass mat for Beauty Baby, in her favorite colors. She's always been fond of pink. I already have the yarn picked out for Sunny's ass mat in a nice blend of blues, but I think he already has placed a stake in the one on the needles. I have to be more careful with those points! 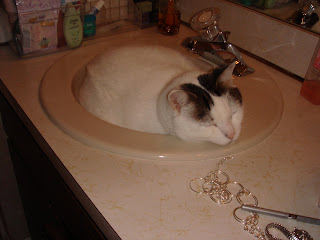 This is Princess, one of my Grandcats in Florida. She's a VERY large cat, probably weighs close to the last Thanksgiving turkey. I don't know how or why but the small bathroom sink is one of her favorite napping places. 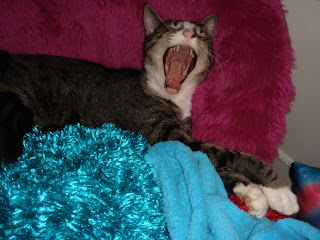 Now would YOU be just a little bit leary of patting Rocky, taking those fangs into consideration? You should be! He's gotten better in the biting department but he always seems to snag me at least once on every Florida trip that I make. This last one he only just grazed my right hand. I guess I just like to live dangerously because I can't seem to keep my hands off of him. But I have learned. The best time to do patting & squeezing is early evening, when he's tired and very groggy. I supposed he just doesn't know what's going on.
Posted by Phyl at 9:44 AM