When I started The Central Park Footie Contest I really didn't know what I was getting myself into. SO many adorable pictures of pet feet were entered that I literally took hours in the decision process. I did not use a random number generator which I thought would help with equally deserving entries. Instead, I enlisted the help of family members to help choose the winners in each category.

AND NOW, without further ado, are the winners:

THE CUTEST AWARD goes to both RICKY & PHOEBE, owned by Dotty! 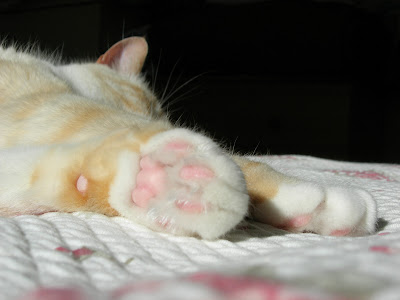 Ricky's Mom writes, "Ricky is an 8 year old flame point ginger/siamese mix. He's a stray that we rescued from a local shelter. He's loud and loves to sniff the inside of people's shoes. He steals food whenever he can. I call him the "cat alarm" because he sits at the bottom of the stairs and meows loud enough to wake me up in the morning. 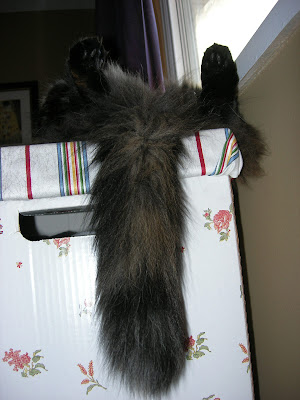 "Phoebe is 11 years old and she's a tortie complete with tortie-tude. She was also rescued from a local shelter. She's a med/long hair and has the tiniest mew. Her favourite way of waking me up in the morning is to sit on my pillow and purr really loudly. If that doesn't work, she leans over, sniffs my face, and licks my eyebrow."
CONGRATULATIONS, on the double win, Dotty!

THE NOT-SO CUTEST AWARD goes to MIA, owned by Megann! 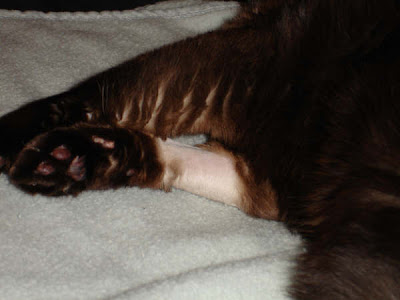 Mia is adorable and she won in this category because of her poor shaved paw. Megann writes, "Here's a picture of my cat's foot. Her name is Mia and she's 11 years old. She is currently going through a lot of medical issues right now and her leg is shaved where they keep having to put the IV in. She HATES the shaved part and shakes her leg around all the time and licks it. Sometimes she even stop walking and just stare at it like it's some weird growth...lol We call it her chicken leg for some reason. Please keep your fingers crossed that she will be ok. Tomorrow is x-ray, ultrasound and needle aspiration of her liver day.

Best wishes for a good prognosis and a speedy recovery, Mia!

THE AWARD FOR THE LARGEST FOOT goes to CHIEF, an 80 lb. Dalmatian, whose owner is Marj. 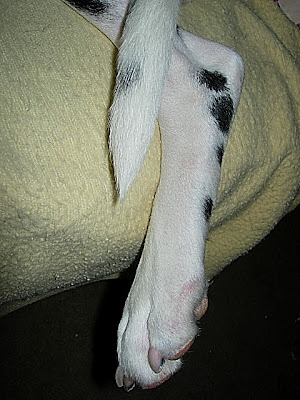 THE AWARD FOR THE SMALLEST FOOT goes to GUS! 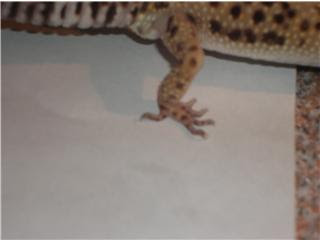 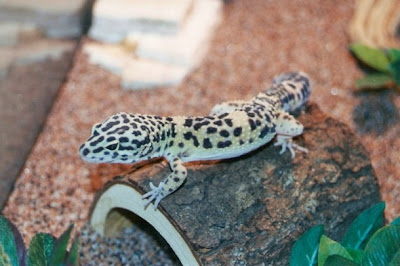 His Mom, Kate, writes,"Gus is a 5 year old leopard gecko. He is about 6-7 inches from nose to tail. As with most reptiles, Gus is fairly easy to care for. He gets fed live crickets 3 to 4 times a week, has his water changed every other day, and just lounges around in the "sun" the rest of the day since he is mostly a nocturnal animal. His "sun" is a special 75 watt spotlight and his "moon" is a 25 watt blacklight made especially for reptiles. Leopard geckos are different from other geckos in that they have movable eyelids instead of nictitating membranes over their eyes. They also do not have the ability to climb walls since they do not have the little suction cups on their toes. Every now and again, Gus gets to walk around outside his cage and people are always a little surprised when they feel his feet on their skin. He has tiny claws that pinch a little. He is quite fast too, and we have had a few escape attempts when he's out and about for a walk."

THE MOST UNUSUAL goes to FIZZGIG!

Fizzgig is a bearded dragon owned by Carry.

THE FURRIEST goes to TRIBBLE! 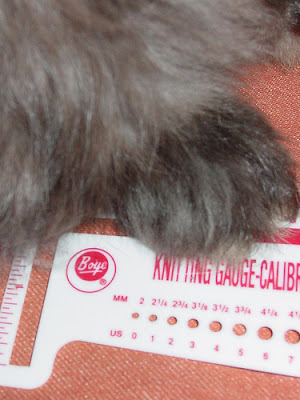 Tribble's Mom, Tanya, writes, "Tribble is a Jersey Wooly bunny who came to us from a confiscation of over 80 rabbits and in spite of such a poor start to life she has an amazing personality and just loves people. She is bonded to Tuxedo (13 y.o. male) and Sophie (~5 y.o. female) and spends most of her day snuggling with them or grooming them. Tribble earned her name because she is small and furry and she "talks". She coos and chatters while she grooms herself; she snores (very delicately, mind you); she sounds the alarm when she gets groomed.
Tribble came to us via the Minnesota Companion Rabbit Society which can be viewed at MN.CompanionRabbit.org."

THE PUDGIEST goes to KEL! 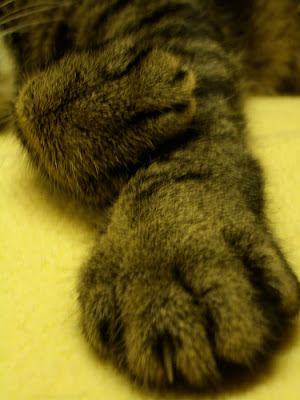 Kel's Mom writes, "I took this when Kel was lying on my bed, keeping me company (I'm recovering from bronchitis) and luxuriously stretching his paws. He has such lovely furry paws with soft black underfur between each pad. He has such control over each toe they're almost like little thumbless hands.

THE MOST COLORFUL FOOT Award goes to TWINKLE TOES! 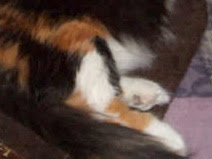 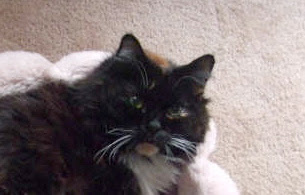 Her Mom writes," Twinkle Toes is a big beautiful old gal of 16 who is called “Aunt Tink” around the house because she is the surrogate Mom to all the other kitties. She nursed and never left the side of each kitty as they went through their final days of illness including both siblings before crossing over the rainbow bridge. She grooms her kitty friends and never leaves our side, keeping us during illness as well. She is a sweet, gentle and undemanding. Twinkle is the most special of cats and has stolen our hearts, always."

AN HONORABLE MENTION goes to PRINCESS, my Grandcat, owned by Jenna! 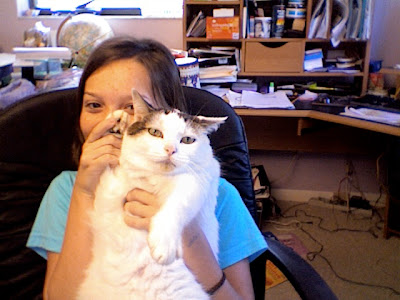 Jenna writes, "One day when I was 3 years old there was a park by my house. My mom pushed me in a stroller as she walked around the park. We saw a kitty, very cute, about my age. When we got back to my house we noticed the cat had followed us home. At the time we already had one cat so we had cat food. So my mom put a bowl of water and cat food outside for the kitty. We had two doors, a regular door and a screen door in the front. The regular door was already open so I opened the screen door and she flew rite in my house. Ever since that day we kept her and I named her Princess (I was only 3). Now I’m 11 and we still have her. All she does is sleep, eat, and hisses at our new 11 month old teacup/toy Pomeranian but that is what makes her her. I love her so much and if I could pick any cat in the world besides my other cat I would pick her. Remember when I said I named her Princess and I was only 3, well if I could pick a new name now I wouldn't change it."

It will be difficult to think up a prize for Jenna & Princess, but I’m sure I'll come up with something. : )

CONGRATULATIONS to all the winners and THANK YOU to everyone who entered their pets. I received pictures of over 60 pets and I wish I could give prizes to each of them.

I will be contacting the winners to make arrangements regarding sending your prize.

It's time for Sunny & Beauty Baby's evening brushing session, so I will now say Goodnight! 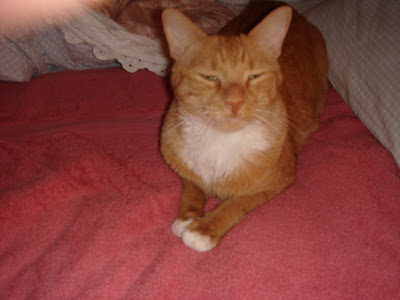 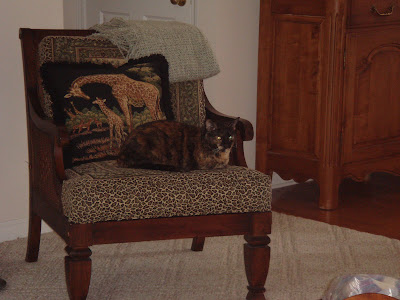 Thank you so much Phyl, Kel and I are delighted with his win, and he is assiduously grooming his Pudgy Paws as I type, keeping them in championship form :-) It was great to see all the winning photos and I really hope that Mia gets strong and healthy again soon!

Thanks so much Phyllis! Gus and I are so excited to be included in the list of winners! It was a great contest and it's so nice to see all the winning pets. :) ~Kate

Thanks for having the contest. Ricky and Phoebe say, "purr meow meow purrr" trans. "thank you very much, more treats please"

Congrats to the winners! I love all the pet pictures and stories! And so do Hermione and Noah!

Tribble is thrilled! She chattered and cooed at us much of last night. I think she was trying to tell the other bunnies "you may be bigger, but my feet won!". Thanks so much from both Tribble and me!!

Congrats to all the winners! Some adorable pics there. lol, i will go break the news to stalker now that her toes did not win*smile

Stalker is a gorgeous cat! It was SO difficult picking out 1 winner in each of the categories in this contest. We were ohhing and ahhing at all the pictures.